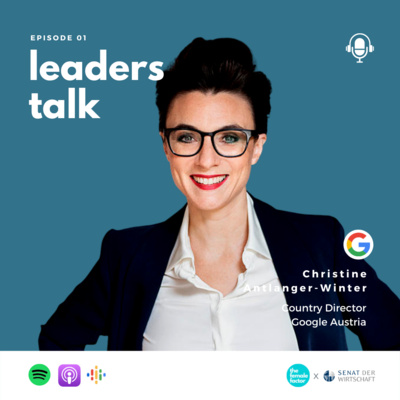 Quote: „Diversity is something that Google supports – with a lot of effort and a lot of impact – it’s also about the inclusivity around it – it’s one thing to bring diverse talent in, and another thing to create a culture where everyone is heard and can thrive“

In the first episode of our leaders talk podcast, Christine Antlanger-Winter – Country Director of Google Austria since 2019, shares her superpower and how her dedication and drive to do things differently helped her get a leadership role at Google. She also explains that diversity is something that she, as a leader, supports amongst her team but also Google, as an employer. Christine recognises the power of authenticity and showing vulnerability in leadership and acknowledges the importance of trust in relationships as „the glue for having diverse teams work“. She walks us through her mistakes that turned out to be a favorable redirection in the end, how she sees women in the future of the tech sector and she will openly discuss motherhood aspects in regards to her career. We will also tap how loneliness can be experienced as a female leader, the role mentoring can play and Christine’s commitment to help the next generation of female leaders.

Christine Antlanger-Winter has been Country Director with Google Austria since 2019. Prior to this, she was CEO of the media agency Mindshare where she built and was responsible for the digital agendas since 2003. She graduated from Hagenberg University of Applied Sciences with a degree in media technology and design. She was President of IAB Austria and has been Secretary-General of IAA Austria since 2018.

Moderator
Mahdis Gharaei:
Mahdis is the cofounder and co-ceo of the global career and HR platform the female factor. Prior to that she was the youngest and only female general manager of an airline in Austria & Germany. She’s a passionate diversity advocate, business woman and opportunity maker by heart. Her TEDxtalk around female leadership in business has been watched over 40.000 times.

About the female factor:
The female factor is a global community for the next generation of female leaders, enabling them to get their seat at the table. The brand recently launched Europe’s first job platform connecting female job seekers with inclusive companies.

About Senate of Economy:
As an independent business network, the SENATE OF ECONOMY is a driving force in shaping a sustainable society and a global eco-social market economy. We offer concrete and practice-oriented know-how for entrepreneurs and political decision-makers.