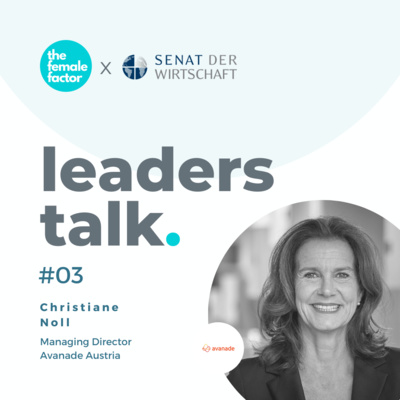 Quote: diversity is not only women and men / stay authentic and stay as you are and not as you think others should expect you to be

Christiane Noll, managing director of Avanade in Austria, shares why it is important for people to come first in every business, her perspective on the diversity aspect in teams and the flexibility in her leadership style. Going further, she discusses the progress regarding the number of females on executive level roles in Europe and DACH area, the role mentoring and networking played in her success and the reasons behind choosing to get into the tech industry. Christiane also shares her views on the new hybrid world and gives us insights on her new book and shares the story behind the title – ‚IT GIRLS – Wie Frauen die digitale Welt prägen‘. She addresses the quota subject and argues why we shamefully still need to include it in the D&I strategy and shares what are the things she would have liked to know 20 years ago.

Christiane Noll: is the managing director of Avanade in Austria. She sees the digital transformation as a decisive competitive advantage for companies in Austria and together with her team accompanies them on the way to the digital enterprise. It is important to her that people are at the center of attention to successfully address issues such as digital innovation, Cloud, Internet of Things, digital jobs and the digitization of customer experiences. These fields are more relevant than ever for large corporations, SMEs and the public sector in Austria.

Mahdis Gharaei: Mahdisis the co-founder & co-ceo of the female factor. She’s a passionate diversity advocate, business woman and opportunity maker by heart with a particular focus on creating cross-border relationships thanks to her Persian roots. Before starting the female factor she served as one of the youngest general managers of an international airline and had leadership roles at non-profit organisations such as the World Affairs Council, AustrianStartups and Female Founders.

About the female factor:

The female factor is a global community for the next generation of female leaders, enabling them to get their seat at the table. The brand recently launched Europe’s first job platform connecting female job seekers with inclusive companies.

About Senate of Economy: As an independent business network, the SENATE OF ECONOMY is a driving force in shaping a sustainable society and a global eco-social market economy. We offer concrete and practice-oriented know-how for entrepreneurs and political decision-makers.