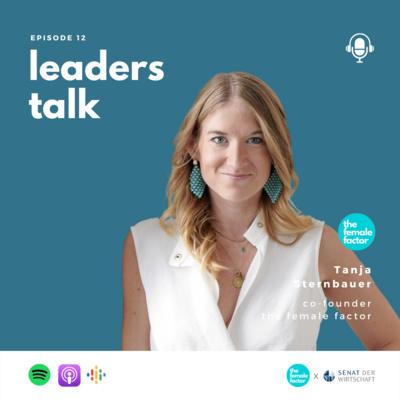 Quote: “Everyone told us: “There needs to be one who calls the shots and it’s not gonna work if it’s the two of you.” So everyone said “nope,” and we said “duh.”

In part 1 of our finale, Tanja Sternbauer, co-founder and co-CEO of the female factor, talks about the path to making female leaders more visible. She shares the reasons behind the creation of the female factor and the pros and cons of co-founding a company together.

Tanja discusses the future generation of leaders and how the female factor seeks to foster them in their own team. She shares her vision of remote work culture and nurturing mental health in a space where the team is truly passionate about their mission and job. Tanja goes deep into her experience with shared leadership and explains why it’s a model that she and her co-founder Mahdis love.

Tanja Sternbauer: Tanja is a serial entrepreneur, awarded as „Female Rolemodel in Europe“ and named one of the 100 most influential businesswomen in Austria. She co-founded the female factor, a global career and hr platform working on closing the gender leadership gap. The community is supporting aspiring female leaders across 75+ countries to get a seat at the decision-making table and advises inclusive companies like Google, EY, Visa and Mondi on attracting and retaining female talent.

Mahdis Gharaei:
Mahdis is the cofounder and co-ceo of the global career and HR platform the female factor. Prior to that she was the youngest and only female general manager of an airline in Austria & Germany. She’s a passionate diversity advocate, business woman and opportunity maker by heart. Her TEDxtalk around female leadership in business has been watched over 40.000 times.

About the female factor: The female factor is a global community for the next generation of female leaders, enabling them to get their seat at the table. The brand recently launched Europe’s first job platform connecting female job seekers with inclusive companies.

About Senate of Economy: As an independent business network, the SENATE OF ECONOMY is a driving force in shaping a sustainable society and a global eco-social market economy. We offer concrete and practice-oriented know-how for entrepreneurs and political decision-makers.